On June 18, the Southern University of Science and Technology (SUSTech) held the Seminar on Coordinated Development of Disciplines and Emerging Industries at the SUSTech Convention Center. Yuehong CHEN, Dean of the School of Humanities and Social Sciences, presided over the opening ceremony. Leaders of relevant government such as the Education Bureau of Shenzhen Municipality and the Shenzhen Science and Technology Innovation Commission, relevant universities in Shenzhen, and executives from Shenzhen enterprises such as Tencent, BYD, DJI, and BGI were invited to attend the conference.

They conducted in-depth discussions on topics such as the construction and structure of disciplines and majors in universities, the strategic needs of emerging industries, and the cultivation of top-notch innovative talents. Zhifeng CHEN, Deputy Director of the Education Bureau of Shenzhen Municipality, pointed out in his speech that universities in Shenzhen should become the core engine and innovation source for industrial development, and better serve the development of Shenzhen’s emerging industries.

Jianguo XU, Second-Level Inspector of the Shenzhen Science and Technology Innovation Commission, emphasized that to better serve the development of emerging industries in Shenzhen, universities and enterprises should integrate with each other on the future direction of talent training.

Yili JIN, President of the Shenzhen Education Society, said that this conference reflects the academic response to the strategic decisions and concerns of the party and the government.

In his keynote report, Li JIN, Acting Vice President of SUSTech, reviewed the measures formulated by Shenzhen and the government to promote the integration of industry and education, and elaborated on the planning and layout of SUSTech in serving the development of Shenzhen’s “20 + 8” strategic emerging industries.

Jie TANG, Professor of the School of Economics and Management at the Harbin Institute of Technology (Shenzhen) and former Deputy Mayor of Shenzhen, delivered a keynote report at the conference. He analyzed the relationship between universities, industrial innovation, and urban development in western developed countries such as Germany and the United States, and compared the development of higher education and economic industries in urban areas in different parts of China. Professor Hong SHEN, Director of the Center for Higher Education Research at SUSTech and Professor Xiangyun ZHANG of Shenzhen University (SZU) presided over the special reports.

Qinghu MENG, Head of the Department of Electronic and Electrical Engineering at SUSTech, hosted the first roundtable forum between scholars and experts from various enterprises.

Xumu ZHANG, Vice Dean of the College of Science, Zuotai ZHANG, Director of the Technology Transfer Center (TTC), Lijun LIU of BGI-Shenzhen, Meng XUN of BYD Group, and Menglong ZHU, Director of Machine Learning at DJI, discussed and exchanged views on how to achieve a win-win situation for faculty members, universities, and enterprises in university-enterprise cooperation.

The event concluded with Hong SHEN acknowledging the participation and high quality of reports presented at the conference. She emphasized that through discussions and exchanges from people of all walks of life would better promote the coordinated development of disciplines and emerging industries. 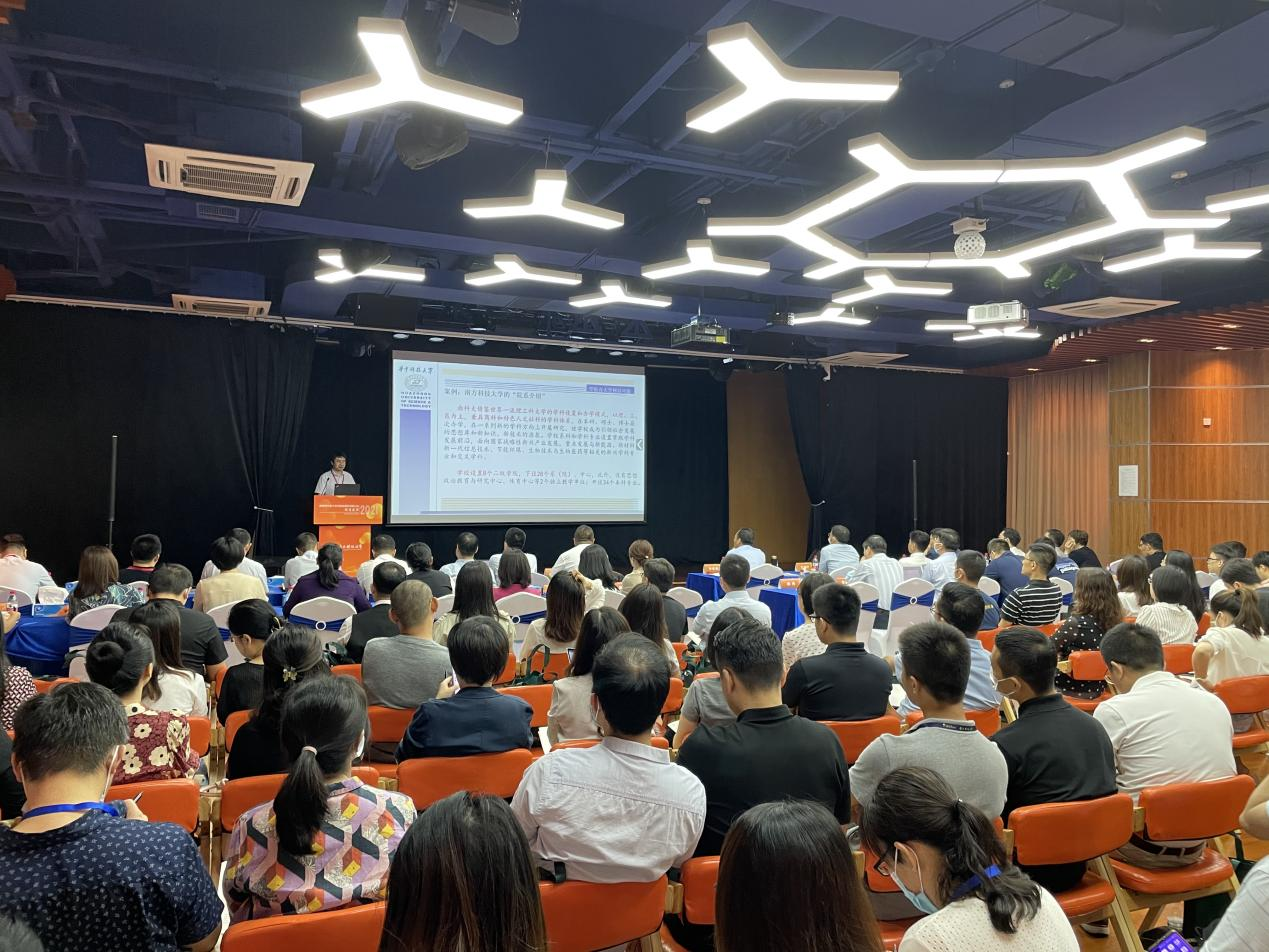